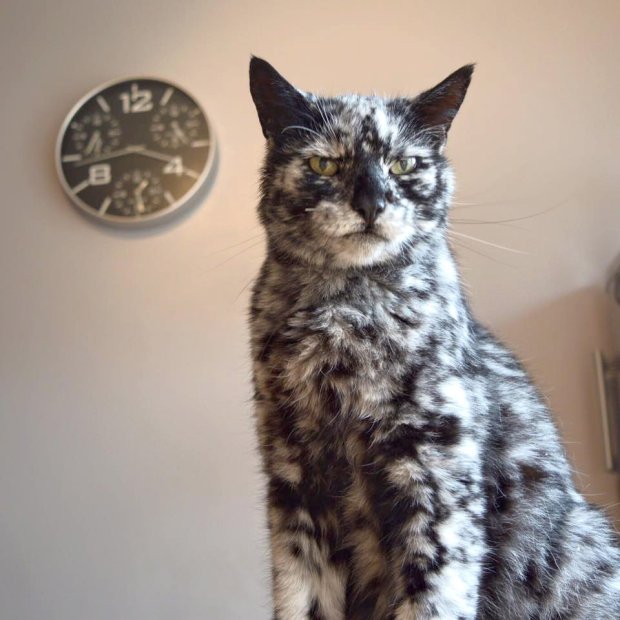 I am so honored to have Senior Scrappy to be part of my tarot project. Scrappy and his Cat Dad: David, have a great story.

Meet Scrappy, the cat that turned black and white. The 19-year-old turns heads thanks to the marble-like effect of monochrome patches of fur. Owner Dave Platt, a builder from Yorkshire, explains: “Scrappy was jet black as a kitten. But when he was seven my mum was looking after him and rang me to say a white patch had appeared on his head. We took him to the vet as we thought he might have had a stroke. At that time, the vet couldn’t explain what was causing it. In the next few years, Scrappy began to get more and more white patches, then it slowed down. But in the last three or four years it has started again. More recently, a vet identified that Scrappy could possible have vitiligo. We don’t know, but he may turn completely white.” Vitiligo is the same condition that caused Michael Jackson’s skin to lighten. More common in humans, the long-term condition sees pale white patches develop on the skin. It is caused by the lack of melanin, a pigment in the skin. Dave says: “People started noticing Scrappy’s unusual appearance when he went out and would come to see him; even the postman takes pictures. People seem to love cats so it is nice that people around the world might get to enjoy pictures of him. He is getting on a bit in age but is still active and playful. That said, he does have his grumpy moments, as I guess we all do in old age. He doesn’t mind having his picture taken, but it is definitely him who decides when he wants to be photographed. A little bit of chicken usually aids the process. Can he handle fame? Well, Scrappy is a bit of a diva sometimes. ” Where: Yorkshire, United Kingdom When: 15 Dec 2016 Credit: David Platt/Cover Images **All usages and enquiries, please contact Glen Marks at glen.marks@cover-images.com – +44 (0)20 3397 3000**

Senior scrappy was brought home over 20 years ago by David, who adopted Scrappy as a pure black kitten. “I made the decision to take Scrappy as I knew he would be the last one to be taken, if at all.”

11 years in, Scrappy began to slowly turn white. David and his family believe this pattern is due to a rare skin condition called Vitilago. Scrappy was progressively turning white transforming his black fur into a gorgeous marbled pattern.

Scrappy has since passed after living a nearly 20 years. David still keeps Scrappys social media going and raises money for a very important cause in England. York Rescue boat is a volunteer run program that patrols bodies of water during high risk times. David Scrappy has helped raise money for these boats in the past. David is also a key volunteer.

I am very happy to help David raise money for the cause of his choice. 50% of Scrappys Print will go directly to York Rescue!